10% Off All Purchases
Ends Monday at Midnight!! 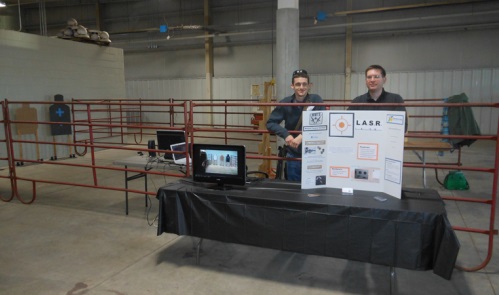 We offer custom software development with wide-ranging capabilities and a wealth of experience. From consumer-grade mobile apps to point-of-sale systems, we are a full-service house.

In late 2012, John of MWTS started experimenting with a laser pointer, a webcam, and a computer. Through a local gun forum, he got in contact with Jason of Centrolutions, a software developer, and they turned John's idea into a piece of software. After a bit of development and polishing, LASR: Laser Activated Shot Reporter Version 1.0 was released in early 2013.

Both John and Jason continue to work as partners on the software as they develop more features and functions. LASR has had a number of minor and major version upgrades. Most recently LASR 4.2 was released, and just like all updates, was free for all users. The software has been featured in a number of magazines, blogs, video channels, and John and Jason can be found at most major events in the firearms industry, including SHOT show and the NRA Annual Member's Meeting.

In late 2018 we released LASR X. LASR X is a browser-based web app, allowing LASR to run on ANY device with an internet connection. The original LASR software was renamed to LASR Classic to avoid confusion, as it is still the best option for many users. Both products will continue to be sold, developed, and supported for the forseeable future.

John served more than 6 years in the United States Army as an Infantry Fire Team Leader, and also has experience as a Small Kill Team Leader, and Squad Leader. He completed one 15 month tour in Iraq and a 12 month tour in Afghanistan. John is an occasional competition shooter, certified NRA and law enforcement firearms instructor, has previously been a certified EMT, and worked for the Army Reserves as a Combat Trainer and Small Group Instructor.

After leaving active duty in 2011, John started providing firearms and tactics training through his business; MWTS, LLC. His dedication to both learning and teaching is what brought about the foundational idea for LASR, as well as many of the features and modes within the software. John enjoys providing a useful training tool to shooters of all disciplines.

Jason discovered a love for software development at a very young age. Throughout his schooling he created small games and taught himself different programming languages. Later, his hobby became his profession. He has created custom software for various industries, including insurance, retail, wholesale, distribution, accounting, and many more.

As a side project, Jason created his own company, Centrolutions, and in 2012 it became his full time job. When John asked Jason if he could develop the software for his idea, Jason was excited to work on a project that combined his love of writing software and his interest in firearms...and L.A.S.R. was born. It has since become a major part of what Centrolutions does and Jason enjoys it very much.

Nick has vested interest in firearms and historical weaponry. Born and raised in Lincoln, he studied International Business and Marketing at the University of Nebraska-Lincoln. He was hired at LASR Team to take over all Marketing responsibilities.

Sam served 6 1/2 years in the U.S Army on Active Duty and deployed once to Afghanistan. After being discharged from the military, Sam started working at LASR Team LLC as a product manufacturing associate and customer service representative, and is developing his skills and knowledge in the shooting community.